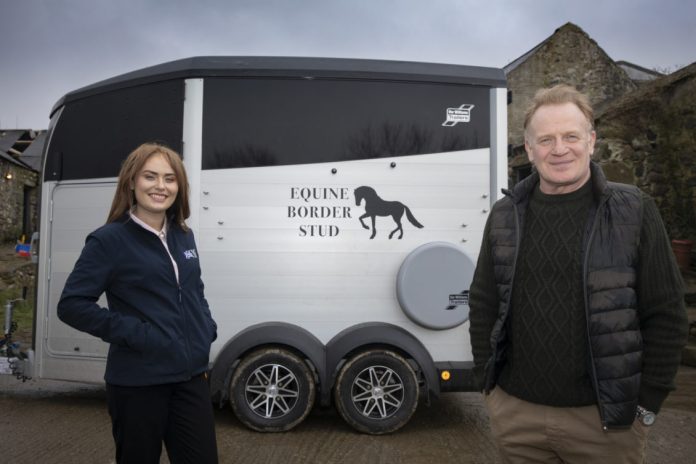 According to media reports, a new TV drama has been hailed as a Welsh take on Lock, Stock and Two Smoking Barrels and The Italian Job – but with a horsebox.

As mentioned earlier, the HBX model provided by Ifor Williams Trailers plays a key role in the S4C series since the plot of Dal y Mellt (Catching the Lightning) revolves around a massive, jet black stallion named Chief.

A contemporary thriller novel with the same name by Trawsfynydd-born Iwan ‘Iwcs’ Roberts is also based on the show. It takes place in rural Meirionethshire, Cardiff, and Soho in London.

It will be shown on S4C this autumn in a six-part series made by Cardiff-based Vox Pictures.

A star of the show is Mark Lewis Jones, who hails from Rhos, near Wrexham, whose long list of credits includes blockbusters like Master and Commander and Robin Hood, as well as Game of Thrones, Keeping Faith, and a Welsh version of the popular television drama, Un Bore Mercher (One Wednesday Morning).

While mark lewis jones was filming some pivotal scenes at a remote farm, Bryn Ifan, near Clynnog on the Llyn Peninsula, he paid a loving tribute to Gwawr Mason, his former drama teacher who sadly passed away in 2020.

Ysgol Morgan Llwyd, in Wrexham, was his inspiration during his time as a student there, and it helped ignite his ambition to become a professional actor.

During this time, he enjoyed a successful career on stage, on film, and on television, including a stint with the Royal Shakespeare Company.

He recalled: “I well remember the moment she asked me to be in a play, Culhwch, and Olwen, at Ysgol Morgan Llwyd.

It was for some reason that I agreed. Prior to that, I was not interested in acting and no one in my family had ever pursued an artistic career.

I have never looked back since that moment. There aren’t enough words to express my gratitude to her for all the help she gave to people like me and working-class families around Wrexham and Rhos. Her generosity extended to many people, not just myself.

The woman was very special to me. At the time, she influenced a great deal of us as young people. This was around 40 years ago, and I have worked since.

Throughout the series, mark lewis jones plays a shady character named Mici Ffin, who runs a garage while suffering from PTSD.

In addition, he said, “On the surface, he might appear cool as a cucumber, but underneath, he has many problems. Obviously, he’s a complicated person. Having a lovable rogue to play is always fun, especially since he is always good to play.

The horse, named Odysseus after the hero of Homer’s epic poem The Odyssey, is actually Chief, a nine-year-old Friesian horse.

Viewers will be familiar with the magnificent stallion from shows and movies such as The Crown and Mary Queen of Scots.

For many years, he was supplied by Dolbadarn Film Horses located in Llanberis, which has now relocated to Abergele.

As a horse master, Dylan mark lewis jones, who runs the company, says: “It’s the best to work on our own projects, such as Welsh projects, and work for S4C, because we work with teams from London when there are big projects on, such as Warhorse, Robin Hood, and Game of Thrones.

Dal y Mellt is going to be a fantastic series, and I enjoyed working with them 100 percent. The experience has been great.

In the series, Chief plays a central role, and I am pleased we are using a HBX from Ifor Williams Trailers.

Their trailers are great, and I have been using them for years. I consider their horseboxes to be the gold standard.”

A veteran actor, Dyfan Roberts, who was born in Rhydymain and now lives in Llanrug, plays an embittered widower named Gronw, the father of Antonia, who owns Chief.

A large part of the plot revolves around Gronw. He is seeking revenge for something tragic that has happened in his family. Retribution is what he seeks.

“Even though it’s a crime thriller, there is a lot of humour in it. It is very Welsh and has charming characters.

The film is a cross between Lock, Stock, and Two Smoking Barrels by Guy Ritchie and The Italian Job by Michael Caine, with a Welsh twist.

The characters in the play are very interesting, and I hope the Welsh audience will enjoy them. There’s no doubt about it.”

Young Anglesey actor Gwïon Morris mark lewis jones trained at the Royal Central School of Speech and Drama in London and plays the character Carbo, which he describes as similar to James Dean.

“We meet Carbo at the start of the series and he is lost because he has been running away from people who have been pursuing him.

This is a lot of fun, but it’s also a challenge because Carbo is very different from me.

Playing this role has been an amazing experience, and I have done some stunts myself as well. My life has been full of fighting and driving fast cars as well as hanging upside down from cranes.”

Dal y Mellt is being made into a TV series by Llyr Morus, a producer who has worked on Keeping Faith and Pobol y Cwm, having bought the television rights even before the book was published.

“Iwcs sent me a copy of the manuscript, and I read it in one sitting over four hours.”. Because it was so gripping, I rang him immediately to tell him how great it was.

As I was writing the novel, I thought the story should be made into a film or TV series. As a result, when you read the novel, you can see the pictures Iwcs saw in pictures as he wrote them.

“In the series, the horse and the horsebox play a central role. We reached out to Ifor Williams Trailers because Gwyn Eiddior, our designer, had worked with them on a previous project.

This production will also benefit from their support, and we’re thankful for that. It has been wonderful.”

A horsebox was loaned from Ifor Williams Trailers by Lois Wynne, who was invited for a behind-the-scenes look at the shoot at Bryn Ifan.

We were delighted to have had the chance to be a part of producing such a wonderful series.

„Watching the scenes being filmed gave me a fascinating insight into how everything works, and I cannot wait to see it all come to life on screen.

Iwcs’ brilliant novel has spawned a series based on the book and with such a strong cast, it’s going to be a major highlight on S4C this autumn.”